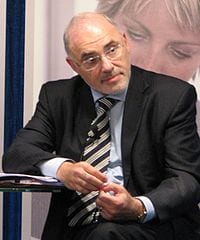 Okay, I’m sure you didn’t need this syllogism to be convinced of the fallibility of CEOs. But Aristotle’s work in logic from the 4th century B.C. continues to have enormous impact on Western thought, including his introduction of the syllogism as part of logos or appeals to reason. In my last post, I discussed how Aristotle’s artistic proofs as means of persuasion – ethos, logos and pathos – have much value for what I think are the most important traits a CEO needs to influence his or her constituents: The three C’s of credibility (ethos), competence (logos) and caring (pathos). In this post, I focus on logos as integral to a CEO’s effectiveness.

Logos is Greek for “word” and refers to the logic used to support a claim (induction and deduction), including supporting evidence such as facts, statistics, etc. While usually applied tactically as a means of persuading an audience, logos is very important to a CEO’s influence. In other words, does the CEO know what the heck he is doing and can he prove it? Does the CEO have the capacity to reason well and build a persuasive case for whatever course of action he thinks is best?

People respect leaders who are knowledgeable and proficient in their chosen area of business. You can have credibility but not competency: People may believe what you say, but they can also believe that you are incompetent. Competency allows people to believe in the vision that you are promoting. This respect is earned through demonstrating valuable skills and expertise to the company via both your actions and your words.

While CEOs demonstrate competence over time by their handling of the overall business, they should also have certain areas where they add unique value to the company. New CEOs in particular should show their competence by finding some area in the company where they can use their expertise to make an immediate, positive impact. These skills could be in recruiting new employees, building strategic partnerships or raising money.

Whatever the area, the CEO needs to demonstrate competence, a powerful work ethic, and a strong desire to improve their knowledge of the business. Since it is impossible for a CEO to be the expert in every area, it should be easy to find parts of the business to study. By engaging these areas and learning from the experts, CEOs will gain respect from the team. Respect for the competency of the CEO gives the team confidence to follow their lead when times are tough.

On September 30, 2010, the Board of Directors of Hewlett-Packard named Leo Apothekar as the CEO and President. I was surprised and confused by this appointment. HP is one of the largest companies in the world with a comprehensive set of offerings across hardware, software and services, with hardware being the largest area. Apothekar had been let go at SAP, a company that generates the majority of their revenue in software and has no significant hardware business. In addition to this mismatch, he was also not familiar with the Silicon Valley engineering culture that personifies HP. With these disadvantages, it was going to be difficult for Leo to be seen as competent by the employees.

Unfortunately for him, things only got worse. HP made a big press announcement that it was taking on Apple with its HP Touchpad product. After poor sales and only seven weeks on the market, Apothekar quickly reversed course and killed the product. Changing directions so quickly caused employees to doubt his competence and credibility. After more missteps and evidence of a clear lack of trust among the executive team, Apotheker was replaced less than a year after taking office.

Any one of the three C’s is enough to sink a CEO but losing more than one is almost certainly fatal (living proof of human fallibility). Demonstrating competence – informed by Aristotle’s logos – is essential to success. I’ll cover the last trait – caring or pathos – in my next post.