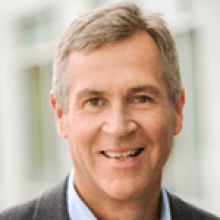 Kevin Hrusovsky is Executive Chairman and CEO of Quanterix, a company that’s digitizing biomarker analysis to advance the science of precision health. He has more than 25 years of experience in the life science space, mostly as a CEO. He discussed with me how he got his first CEO job, including how his dual engineering/MBA education prepared him for the role (read on for what Kevin says his MBA program did NOT prepare him for). He also explained how he gathers input from across his organization and the importance of having a greater purpose as a company. 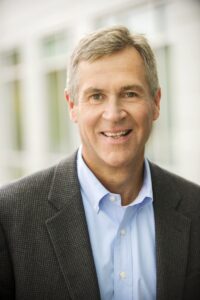 Most people had a plan when they went to college. What did you think your career was going to look like?

Kevin: I always felt that I would try to use an engineering degree to get into technology businesses. I also planned to get an MBA so that I could play a more influential role in managing high-tech businesses. What’s interesting is that I was a mechanical engineer but I ended up joining DuPont, a chemistry company. I was somewhat out of my element. It’s telling that as I got into it, I realized how much I didn’t know. I felt that all my time was a lot of learning about chemistry, which wasn’t what I was trained to do.

Do you remember a moment when you first thought of the CEO role and your interest in pursuing it?

Kevin: I spent nine years at DuPont. When I started out in the engineering program, it was a rotational program. I would spend two years at one location and then move to a new location. There were circumstances that put me in different positions every six months. I found that very intriguing, because I was learning so many different things so quickly. Even in my second two-year assignment, I had four different positions because they needed help in certain areas. I was learning more and more about probably less and less.

A plant manager at my first site went into running businesses at DuPont headquarters and invited me to move from the engineering program to a product management position. That was my first time to be on the commercial side. I had just gotten my MBA. It was interesting to learn how the actual business ran as opposed to the science and chemistry part of it. That was when I could see my career evolve into a broader business management responsibility.

That’s pretty common to get an engineering/MBA degree combination. Looking back, do you think that’s the right combination for somebody who wants to move into the CEO role at some point?

Did you take any courses that were particularly valuable, that maybe you didn’t think were that useful at the time?

Kevin: In the executive MBA, you do work in the job you are in. I enjoyed marketing and strategy due to my product management role. I remember even bringing in some of the teachers from my MBA to help teach my team some of the critical things about strategy and marketing. I would say that as time went on, finance ended up being an area that I really appreciated and probably didn’t appreciate as much at the time. Learning about finance was very important. What they didn’t teach me in my MBA, interestingly, was much about team building or interpersonal relationships or building culture. To me the most important aspect to growing disruptively is forming strong teams.

What was your first chance at the CEO job and how did you get the role?

Kevin: I got my first CEO position in 1996 with Zymark Corporation. Having spent so much time at DuPont, I learned so much about leadership and how to inspire and motivate teams. From there I want to FMC Pharmaceuticals, where I was GM in a very autonomous business unit. I had all functions reporting to me, so I acted somewhat as a CEO inside of a company. A former employee at FMC recommended me for the Zymark CEO job.

A lot of CEOs get surprised by things that are going on in their organizations. How do you keep touch with what’s happening on the ground at your company?

Kevin: I would say three things here: One is that I try to surround myself with people who care about people. If you do that chances are you are going to learn a lot from people who are willing to share. If not then you are asking for a major issue of not learning some critical information that is relevant. Second, I try to conduct a lot of employee meetings to provide perspective on what’s working and what isn’t working. We create dialogue during the meeting but also after the meeting by sending out letters asking those who participated questions about how the meeting went and what questions they might still have, etc. Third, I also do everything I can to reach out to customers directly, either with our sales people or calling them directly. Many times I learn things from the customers about what’s important and what isn’t. That is a vitally important component to the types of businesses I run that are growing, disruptive technologies. I keep those lines of communication flowing fluidly and at a high cadence.

You are in the medicine/health area. What do CEOs in other industries need to pay attention to these days?

Kevin: I would say that having a greater purpose is paramount. I think businesses moving forward need to give back more than they take or they won’t be sustainable. The next generation is very focused on sustaining the globe. You need to be bringing some benefit to society. Honing in on what inspires a greater purpose in your business is going to be necessary for pulling in some of the best talent in the world. No matter what sector you are in that’s very important. Also, there’s a revolution of digital technology that’s been going on for the past 25 years that is transforming at a very rapid pace in every sector of business. You need to be very honed in on whether or not digital technologies can play a role in helping you manage your business better or further enhancing your products that you sell.

Any other advice for CEOs?

Kevin: Having the willingness to bring people into the business who are more capable than you and to learn from them is also vitally important. I’ve been blessed to work with a team of people who are incredibly capable. Many have worked with me throughout my career. Anything you can do to make sure you recognize and attract the best talent in the world, it’ll lead to the best businesses in the world. Most of the focus that I put on any business is the people and what can we do to further inspire them as well as our customers and board members. I have a belief that you have to inspire and measure to a level of 10: Do you think your employees are highly motivated and inspired to a level of 10? Do you have customers who feel that you are bringing so much value to them that they are inspired to be working with you to a level of 10? Do you have investors who understand what you are doing and believe enough in where you are going that they are inspired to a level of 10? All three of those groups should be at a 10, and anything you can do to bring them together is a key piece of our formula. Each year we run summits and invite employees, investors, and customers as a way to further inspire each of those groups together. It’s a way to make them feel united, motivated, and inspired.