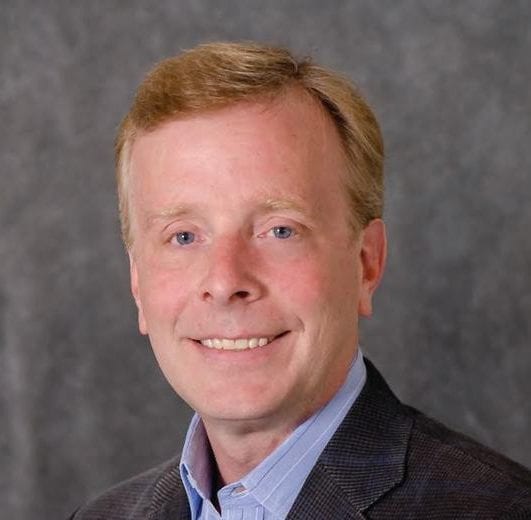 I recently had a chance to interview Fred Goff, CEO of Jobcase, one of Boston’s fastest growing tech companies with more than 50 million registered members and 100 web properties. Their mission is to connect the world’s workforce to empower them in their vocational, professional, and volunteering pursuits.

Fred founded Jobcase on the premise that LinkedIn had effectively abandoned workers without college degrees. I was interested in this as well as his approach to the CEO role.

Did you want to be a CEO when you were growing up?

Fred: What I really wanted to be was a fighter pilot and an astronaut. I thought about being the first person to land the space shuttle on the moon, which was how we thought we would get to Mars years ago. I was accepted by several academies, but health issues got in the way. I scrambled and got into Carnegie Mellon. This turned out to be good luck, because I’m able today to talk about this unbelievable educational institution that’s in my background.

Once I lost the vision of a fighter pilot, I wanted to be President of the United States. My early decisions were really predicated on that, including my decision to get a master’s degree in public policy. I thought my career on Wall Street would give me the right experience and accelerate wealth generation, so that I could be an honest public servant. Somewhere along the line I realized that I couldn’t be the Daddy I wanted to be and keep pursuing public service.

You made the change from the investment community to becoming a CEO. How did that come about?

Fred: I was running $1 billion in proprietary capital for BankBoston Robertson Stephens. I became a big believer in the power of technology to transform industries. However, I felt like I didn’t have the skill set to help lead that. I went back to MIT and ended up forming a machine-learning based hedge fund company, where I carried a CEO role. But it wasn’t until we transformed to Jobcase that the CEO role really was traditional. In Asset management, you can run $1 billion with only a dozen people or so, so the kind of organizational challenges normally associated with a CEO title don’t really apply. Jobcase is on a whole different scale of organizational complexity.

That said, I never took stock in the CEO title. I did have a bit of an entrepreneurial bug, and I always aspired to leadership roles but I was never one to think of ‘ceo’ in particular as anything special – and still don’t.

Did you found Jobcase?

Fred: Yes. We have a different origin story: The machine-learning based hedge fund I started ran into 2008 like so many asset management companies did. A few weeks before Lehman went bust we went to cash, so we were fortunate to not be one of the blow-up scenarios that went bust. Instead, we forked the company and put the rights to the asset management investment vehicle on the side. We refocused the team that we used to construct portfolios of securities. Instead of predicting markets, we can predict consumer behavior. From there we grew and evolved into the labor market.

What was the vision for Jobcase?

Fred: It’s rewarding to spend days getting the right content to the right people about their work life. The biggest factor that really launched us and created the vision for Jobcase was our data. It suggested that LinkedIn had abdicated those with an education below a traditional college degree. We thought we knew what was happening in that part of the labor market. It was woefully underserved. People have been thrust into being their own kind of agents. They receive no training in how to manage their own career and work life. We had the vision to open up access, so that everyone’s work life profile is available, and they build connections among people when they have relevant needs. For instance, how do I get a job at Walmart? How do I get promoted at Target? How do I move from being a warehouse clerk to a nurse?

Whatever these questions are, someone has the answer, and people can get advice about how to follow that path from the real experts – other Jobcasers who have already traveled that road. The real magic is the community of people who help people, with tremendous empathy. It is instructive and inspiring for people to help them keep going. We now have 60 million members. It is so much fun when you measure success by who has been helped today.

It reminds me of that Kevin Kline movie Dave about the guy who runs the job service but is asked to be a stand-in for the president.

Fred: Yes, Kevin Kline and Sigourney Weaver! He has that great statement in there about knowing a thing or two about getting people jobs. Not only do I know the movie, but it’s also in the decks that I present to my team.

How many employees does Jobcase have now?

Fred: We’re up to 95 now, almost all software engineers and data scientists and data analysts. The complexity of the platform we need to connect and empower people requires extremely advanced skill sets to build and maintain. We are also affiliated with MIT’s Computer Science and Artificial Intelligence Lab. We are part of an evolution of Big Data impacting Corporate America.

I think that HR in corporate America is in the third year of seven-year turnover where big data insights and proficiency begins to drive its activities. When I was a proprietary trader back in the 90s, I hired a physicist to work on our derivatives desk, and people wondered what I was doing. Twenty years later a guy with my background in economics couldn’t get a job on the derivatives desk – they all require those physicist type math skills. So Big Data moved from transforming Finance to Marketing and now HR in corporate America.

Today there are great entrepreneurs like Aneel Bhusri who started Workday and a few others who are really moving forward on how big data can inform Human Capital practices. Most of the really cool companies that truly do have proficiency in big data are focused on how they can use it to unlock value for companies. At Jobcase we’re focused on how we can take the big data insights and give them back to the individual person so they can help themselves. That’s a big differentiating factor.

What advice would you give to a new CEO?

Fred: Get the people and culture right. Ensure clarity of mission and metrics of success are known to everyone. Ensure links of any individual’s success metrics are linked to the overall organization’s success metrics. Make sure your people have the resources they need to succeed. Be authentic. And think of the role more like a Conductor of an Orchestra than some old-fashioned “boss” model.

For me, being authentic includes trying to create a culture that includes the golden rule, full transparency, consistently triaging the most important things to work on, data-centric and meritocracy. This works for our business because change is so frequent and unpredictable. But perhaps other businesses or other people embrace different aspects that allow them to be authentic in their leadership.

But you must realize – It all comes down to people. So many of us go through business training focusing on marketing and finance classes, and then we get a few years under our belt and realize that the people part – organizational behavior classes – was the only thing that mattered!

You gather a lot of data on your customers and the country as a whole: Is there anything you see going on or trends that fellow CEOs would want to know?

Fred:  A couple things. First, a strategic observation: this is an unbelievably fragile, shallow economy. Government economists say we’re at full employment, but labor participation rates are low. Underemployment is still near double digits. We have pockets of 25 percent unemployment. Worse, we have dumbed down the definition of full employment. The stats out of the Fed say that 47 percent of American households don’t have enough money to cover a $400 unexpected expense. Does that sound like a ‘full employment’ environment?

We see this fragility reflected every day in the Jobcase community. Even folks who are employed are nervous. When you look at the Presidential election, Sanders and Trump are outlier candidates by traditional standards. People in a full-employment economy don’t vote for outliers – they vote safety and status quo. So the signals for fragility in our economy are ample. So I have two messages for CEOs: 1) You better have your plan for when the economy turns. If it does it’s going to be a lot quicker and deeper than what’s expected.

2) A more tactical observation from the human capital space on your hiring: Focus on retention-hiring, not filling seats!

So often people are asking the wrong question. They are worried about getting hires in the door, but the big issue is keeping people employed. McKinsey found that it costs $2,500 to turn over hourly labor. And the best way to do this is to focus time on cultural fits. This is best done at the local level. Brands may be national but talent brands are local. A McDonalds in NYC is very different from one on the Ohio Turnpike. Surface local talent culture to raise retention and drop attrition.

And when you have your staff, don’t be cheap on compensation. Retention risk is underappreciated. My experience is there are two kinds of managers: At the end of every pay cycle, one manager says this person is doing a great job, how much can we give to him? The second type of manager says this person is doing a great job, what’s the minimum we need to pay them to keep them from leaving. Be the former not the latter.   Your staff will then be 100% focused on their job, rather than 20% focused on getting a different job and looking around. As a CEO, it’s not just the right thing to do; its also in your own interest to try to compensate your team as much as you possibly can!