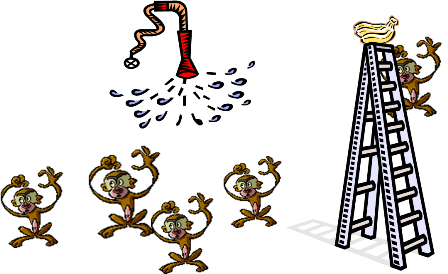 Management by rules or values? Part 1

One day a researcher put five monkeys in a cage. In the middle of the cage he placed a ladder that provided access to a string of bananas he had tied to the top of the cage. The monkeys quickly realized the only way to reach the bananas was the ladder. However, as soon as one monkey started to climb up the ladder, the researcher sprayed all the monkeys with ice-cold water. It only took a few tries for the monkeys to realize that going up the ladder was not worth getting sprayed by the water, so they began to avoid the ladder.

The researcher then replaced one of the five monkeys with a new monkey that had never experienced being sprayed by the water. As soon as he was placed in the cage, the new monkey began to eye the bananas and started for the ladder. This time, instead of spraying the cage with water, the researcher watched as the other four monkeys rushed the new comer and beat him off the ladder. They understood the linkage between climbing the ladder and getting sprayed with water. The researcher continued to replace monkeys in the cage with monkeys that had never been sprayed before. Each time the same scenario developed: The new monkey would eye the bananas and begin to climb the ladder only to have the other monkeys beat him down.

Eventually all the monkeys in the cage were monkeys that had never experienced the ice-cold water, but they still avoided the ladder and would attack any new comer. After a while one of the monkeys turned to another monkey and said, “Why do we always beat up any monkey that tries to go up the ladder?” The other monkey replied, “That is just how we do things around here.”

While obviously fictionalized, this story is loosely based upon research done in 1967 by the researcher G.R. Stephenson and has been used many times to describe how rules develop in organizations and persist, even though no one remaining knows why the rule was even created in the first place.

The necessity of rules-based management

When a company starts, no one including the CEO knows exactly how things are going to work. Every time a new situation occurs, the founding team jumps in and figures out how to handle the situation based upon their unique approach to the market. As Jim Schleckser, CEO and managing partner of the Inc. CEO Project, tells us, “Early in an organization’s founding you overcome the lack of processes and systems with talent.” This is often a competitive advantage for startups as they invent new and better ways to engage their customers. Of course this process doesn’t scale.

In order to grow, you must transition from a pure values-based mindset to a more rules-based approach to get things done. The whole process of transitioning from a startup to a successful company with a long-term future is a process of learning what works and trying to institutionalize those successes. As Jim advises, you must invest in systems and processes to run more efficiently and reinforce your value proposition. If you don’t, you won’t grow.

How do you strike a balance?

At this point, you have to strike a balance between trying to create a rules-based process for everything and trying to make every decision based upon the values of the organization, while balancing the needs of all the stakeholders. Going too far to the rules-based side will lead to an organization that is inflexible and – like the monkeys in the story – often does things that no longer make sense. On the other hand, a pure values-based organization would spend so much time figuring out how to act in each situation that they would struggle to get much done.

The question for the CEO is: How do you get the efficiencies of a rules-based organization while maintaining the flexibility of a values-based approach? This will be the subject of my next post.

Six hats of the CEO: Engineer